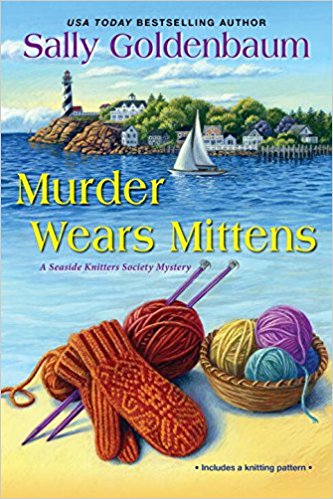 This cozy mystery is set in Sea Harbor, a fictional New England town where four ladies of varying ages and circumstances get together to do some knitting, confirm their close mutual friendship and occasionally turn amateur detective when a new murder mystery pops up.

This time, the victim is a nice enough, if mildly eccentric older lady from the edge of town. She was one of those people whose face you see around, but maybe you never thought twice about and you often couldn’t remember her name. It’s only when Dolores Cardozo is found dead that it becomes public knowledge that she was secretly wealthy–and a frequent big-money donor to various charities and nonprofits in the area.

Meanwhile, our four protagonists are organizing a charitable drive of their own–knitting all manner of warm clothing items to help the less fortunate through the cold New England winter. And one of them, Cass Halloran, has an unsettling encounter with a strangely frightened little boy at the town laundromat. Trying to return clothing the kid left behind in his panic leads Cass and her friends into contact with a young, struggling single mother and her two sweet children.

The mother had gone missing, only to turn up–injured and suffering temporary amnesia, with evidence suggesting she was hurt at (or very near) the scene of the older lady’s murder. It doesn’t look good at all, when she can’t explain what happened–or even admit why she’d gone to see Delores on the night of the killing.

The knitting society ladies instinctively decide the young mother is innocent and start to investigate other possibilities. A smarmy young newspaper reporter keeps turning up–is he involved somehow? And what possible motive was there to kill a woman few knew well, but who turned out to be secretly VERY generous?

The truth will come out, justice will be served and the four ladies will of course be the ones who puzzle out the key facts–even confronting the actual killer in the end (who of course tries to justify what happened, thereby angrily and rather stupidly confessing in front of witnesses). It’s an amiable enough sort of story, though in the end I was far less than shocked at whodunit–or why.

But in this kind of mystery, it’s more about the characters, the local atmosphere of small town life and other background elements. While the author does an adequate job with these factors, alas, it all failed to come fully alive for me.

For one thing, the town strikes me as pretty ordinary–almost generic and therefore not hugely interesting.

Each of the four ladies have distinctive individual personalities, I admit. And their shared friendships hold the story together well enough. And of course each one has her set of other connections–significant others, friends, children and our relatives, ‘day’ jobs and separate interests. Each woman is in a different stage of life (in terms of their ages, marital/family situations, work issues and the like).

If anything, I found there were too many characters, secondary subplots and other concerns going at once. I found it impossible to get deeply invested in any of these.

I think it was Mark Twain who said the ideal way to end a story was with either a funeral or a wedding. Once the killer is unmasked (and another lesser villain also dealt with), Goldenbaum follows this advice and this being a basically feel-good type cozy you can probably guess which option was used.

The book is an okay novel. I don’t want to imply otherwise. And as a series the Seaside Knitters Society has its potential charm. I just don’t see it as an outstanding example of its kind.