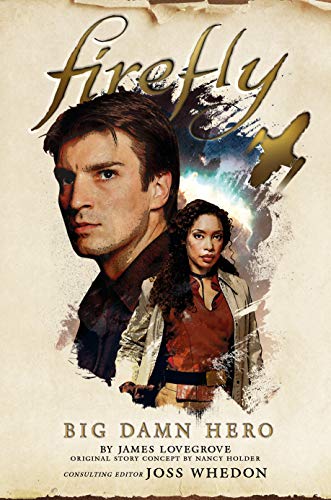 A cult classic TV series that infused future space adventure with thematic elements comparable to Wild West adventure, Firefly spawned a feature film that has achieved similar status. But only now have we begun to see tie-in novels. Big Damn Hero is the first, with at least two more either released or in the pipeline. The co-authors here are both accomplished veterans of tie-in books and SF/F/H fiction in general. In this case, the award-winning Holder came up with the bare bones idea while Lovegrove fleshed it out, producing the final complete novel. While slightly unusual in purely literary circles, similar arrangement are very common in the television milieu–especially in episodic series like Firefly. Show creator Joss Whedon is even credited as a “consulting editor” (whatever that means).

Big Damn Hero takes place somewhere toward the middle of the series, making occasional references to past adventures and characters previously encountered. This will delight dedicated fans, but are never so intrusive to bog down new readers. Likewise, the entire crew of the Firefly-class cargo ship Serenity effectively show off aspects of their particular personalities and backstories. Book’s decidedly unholy past proves a particular advantage this time out. Again, longtime “Browncoats” will be pleased by how each are portrayed without leaving newcomers in the dark.

Wily and smart-mouthed but deep-down honest ship’s captain Mal Reynolds finds his past catching up to him here. After taking on a dangerously unstable cargo, he’s lured into a trap and kidnapped. Second in command Zoe and the rest of the crew are frantic to learn who spirited him away, why he was targeted and, of course, rescue him. But they also need to deal with their cargo (and avoid getting blown up by it).

Without Mal’s talented scheming to fall back on, Zoe must rise to the occasion–and of course she does.

The crew divides up to accomplish its dual aims, while Mal struggles to defend himself while facing a kangaroo court of vengeful former comrades turned vigilantes.

As always, the ship and its crew are already under threat from the repressive interplanetary Alliance that Mal and Zoe, and thousands of other Browncoat militia fighters, lost their war of independence to several years back. The smuggling activities that frequently pay the bills are only part of that. There’s also the fact they’ve added the bio-engineered and emotionally damaged Alliance super-soldier River and her doctor brother to the crew. The Alliance wants their “property” back, and to punish Simon. the brother who helped her escape.

Without going into excessive spoilers, it develops that Mal has been wrongly accused of betraying the Browncoat cause. The ringleader of the embittered former soldiers is a childhood friend turned inexplicably bitter enemy. The real reason he’s out to get Mal has only the vaguest connection to the war and will be confirmed at the very end.

For the most part the novel moves well, from character to character and scene to scene. Near the end, I felt it did fall prey to one bad (and illogical) cliche. When Zoe and company arrive (in the nick of time, naturally) to get a tenuous drop on the vigilantes, the lead bad guy gets into a one-on-one debate with Mal. As per old-time pulp silliness, said baddie admits the charges were a frame-up and freely reveals his true motive for going after our Big Damn Hero. What’s more, he and Mal have this unneeded talk as the seconds tick down toward a moon-mangling explosion.

It’s no surprise that the Serenity and her crew all get out alive (just barely), but the vigilantes all get blown to bits. But on the whole, its a solidly entertaining addition to the Firefly universe.