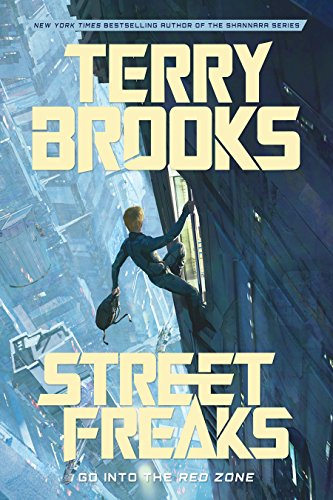 At some point Brooks, a legendary fantasy author particularly famed for his epic series about Shannara, decided to try his hand at near-future SF. This good, though I’d respectfully say not great, novel is the result. Los Angeles has become even more of a sprawling mega-city than it is in our time. It’s not quite an outright police state, but with units of the almost unregulated and unaccountable Achilles Pod throwing its considerable weight around the place is verging in that direction.

The Red Zone is the one area where even these thugs might be reluctant to frequent. It’s a mostly lawless ghetto-like expanse populated by the very poor and outcasts, human and technological alike. It’s a place Ash Collins has never visited. He’s the pampered son of a top bio-medical researcher.

But one day Ash gets a brief and desperate message from his father. “Go into the Red Zone. Go to Street Freaks,” his Dad instructs. Ash doesn’t even know what “Street Freaks” is. But his moment of hesitation ends suddenly, when a hit squad of killer robots invade his luxury apartment. They slaughter his household robots and he barely escapes in the first of several admittedly thrilling action sequences.

Long before this frightening day, his father shared a cryptic warning that hinted his giant corporate employer was involved in some unnamed but dangerous secret business. His Dad obviously didn’t approve and was working against it, though he refused to go into any details.

It later comes as no big surprise that his father is dead under mysterious circumstances. In any case, Ash blunders his way into the forbidden area and discovers Street Freaks is a business staffed by an array of talented but socially rejected castoffs that build futuristic race-cars (most people in the ‘better’ parts of the city use a system of flying public transportation, the Red Zone population is restricted to wheeled, ground-based vehicles.

His father’s secret involvement with Street Freaks and their smooth-operator of an owner is just one of a complex series of complications involving police- and corporate-corruption, multiple conspiracies, suspense, treachery and individual heroism in the face of deserved paranoia.

Ash finds himself a stranger in the strange land of the Red Zone, where he must relearn how to behave while trying to understand a new, often baffling reality. Much of what he’s always taken for granted about his city and even people he knows is wildly altered in the process.

The technology involved is thoughtfully created and the book has a lot of intense drama. At its heart, it’s the story of a teen-aged boy learning difficult truths and becoming a full-fledged young man. It’s a good read, no disputing that. Yet somehow, it isn’t quite one of the very best of Terry Brooks’s works.