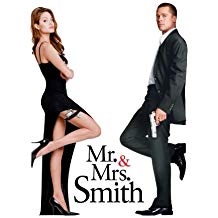 Already 14 years since this came out? Wow. Anyway, even if you never saw this one you probably know about the real-life behind-the-scenes drama of Angelina Jolie and Brad Pitt beginning their relationship as an on-set affair. But let’s not focus on that, okay?

Here and now, the movie is the thing. And what an odd, somewhat imaginative, guilty pleasure blend of murderous action, high-tech spy/assassin gadgetry, passion, sex, and over-the-top comedy this thing is!

Angelina and Brad seem like an upscale married couple whose domestic life has just gone a little stale. She is supposed to be head of a Wall Street firm, while Brad leads a major construction outfit. Of course, in both cases their lucrative ‘day jobs’ are merely cover stories. They’re actually two of the world’s most accomplished (and cheerfully deadly) professional assassins.

The catch is, neither knows about the other one’s ‘real’ job.

Then their rival agencies trick them into trying to eliminate one another. Why? Your guess is as good as mine.

In any event, they go through a lot of over-the-top violence and in the process wreck several buildings, including their own home. Apparently, being seriously pissed at one another for constantly lying about their true selves and then employing all manner of high-tech weapons in a frenzied effort to off your spouse is the key to rekindling faded marital passion. For after ravaging their once-pretty home, they find themselves unable to finish the job and promptly have some very spirited make-up sex in the rubble.

Clueless neighbors call the cops (blasting away at one another caused excessive noise), but the happy/mostly undressed couple convince them it was all some over-enthusiastic home remodeling. Neighbors and cops go away, bemused by it all.

Too bad their employers are as easily satisfied. Both agencies want them dead (why? Still a bit fuzzy on that front). So there’s more, on-the-run action and lots of body-armored and well-armed opponents to survive/slaughter.

A last, absurd but exciting massacre of a nameless hit team finds our stars the last two killers standing and their marriage restored to its previous level of passion.

Direct Doug Liman employs couple’s therapy sessions where Angelina and Brad are seated, facing the camera about the state of their union as a framing device. At the film’s very beginning they’re bored with each other, not to mention burdened by secret lives they don’t acknowledge as important. In the course of periodic interludes of talking with the unseen marriage therapist, we get flashbacks and following the ultimate shoot-out they face the camera/therapist one last time, blissful and content.

The blending of typical marital tensions (lying about everything is NOT a good basis for a relationship) with all sorts of flashy secret agent stuff, impressively vigorous stunt work and extreme violence is an absurd sort of mash-up. It cries out to treat it all as a ridiculous comedy and the cast plays it as such to good, if utterly unrealistic, effect.

Adding to the fun nonsense, the main couple have a pair of co-worker/confidants. Vince Vaughan is an agent who still lives with his Mom; Kerry Washington as Angelina’s assistant/best pal is more dignified, if less memorable. They have the thankless task of playing the loyal friends/supportive sounding boards to the stars.

It’s all a fairly mindless romp, despite the body-count and multiple ruined sets. But fun, nonetheless.

Of course, having functional brain cells, I wondered why the spy agencies would let them both live, after investing (and losing) so many of their other hit teams in trying to wipe the again-happy couple out.

But rational questions have little or no place in this kind of entertainingly loony filmmaking. Just put your better judgement on hold, kick back and let it all wash over you.