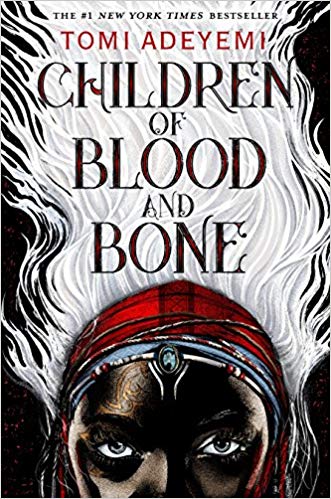 This first novel is already a best-seller with a sequel soon to follow. The author is a Nigerian-American and has studied West African mythology in addition to graduating Harvard with an honors degree in literature. Her heritage and studies surely influence and contribute to the culture she creates here for the imaginary Kingdom of Orisha. Indeed, she employs the real-life Nigerian language of Yoruba as the ‘old tongue’ in which magical spells are cast.

Such incantations were once common in Orisha. But those gifted with magical abilities (the Majji) were brutally suppressed years ago by a vengeful king. First, he somehow managed to immobilize the ten clans’ unique abilities (each courtesy a different God’s favor), then he unleashed genocidal attacks that killed all known Majji adults. It seems you had to be a certain age for your latent magic to manifest itself. So he spared their children, who now are coming of age. They remain an oppressed, feared and vilified minority, despite their inability to perform magic.

Zelie Adebola is a young woman whose mother was a Reaper (a Majji with the power to summon the spirits of the dead). Her father had no magical abilities and so was ‘only’ savagely beaten for trying to protect his wife in that years-ago pogrom (known as the Raid). Likewise, her brother has no spell-casting abilities. But Zelie has the telltale snow-white hair that marks a potential Majji.

A trip to the capital city (Lagos–one of several place names Adeyemi borrows from Nigeria) finds Zelie blundering into contact with Amari, a rebellious princess who has impulsively stolen a magical artifact that could bring magic back into the land. Not knowing what she’s getting herself into, Zelie helps Amari escape and in the process has her latent Reaper powers suddenly awakened.

They flee with Inan, Amari’s brother and top heir to their obsessively hateful father’s throne, in hot pursuit with soldiers. Inan, like so many of those exposed to the King’s propaganda, is ready to do almost anything to prevent magic’s return.

A series of harrowing adventures, twists and turns follow. Lives, innocent and otherwise, are lost. Amari and Zelie’s protective brother Tzain find themselves falling into a forbidden love. Zelie finds she is the key to bringing back the magic, yet doubts her abilities. Unlikely yet still-believable events find Inan obtaining a power he is shocked and horrified to possess–and even more unlikely ends up in the fleeing trio’s company.

Will he overcome a lifetime of bigoted teachings, embrace magic–and the growing attraction he and Zelie share? For that matter, will she ever be able to trust the son of her mother’s murderer? And in the end, should she?

I won’t give much away. But I will say that the author doesn’t settle for easy, feel-good answers. Conflicted love and conflicting duties plague all the four main characters here.

Most chapters are narrated by Zelie, while Amari and Inan provide their points of view from time to time. Tzain never takes center stage in narrative terms, yet remains a strong character in his own right. I will admit the whole tortured-struggling-against-ones-prejudices theme that dominates so much of the emotional conflict here goes on a lot and a long time. Some readers may find this repetitive and/or frustrating. Yet given the state of the society created here, these inner conflicts strike me as valid.

And I should note that even the purest villain of the piece (the magic-hating King) has a terrifying history that explains, though doesn’t excuse, his ruthless brutality.

This being the first book in a series, it leaves a good deal unresolved–which may trouble some readers more than it did me. On the other hand, the blazing violent conclusion, followed by an understated epilogue, produces a somewhat cliff-hanging end to this book that makes me doubly interested in the next book’s direction.