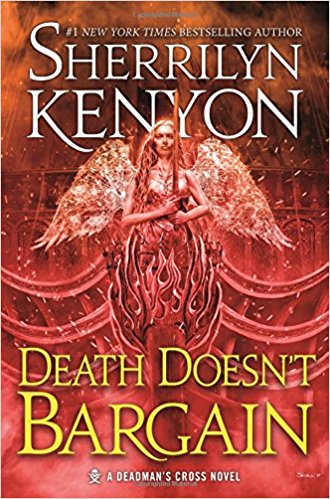 Bestselling author Sherrilyn Kenyon does so many book series, in so many genres (often, as here, blending several genres together) that it’s very hard to keep up with it all. This one is the 2nd book in the Deadman’s Cross cycle. I haven’t seen the previous novel, but this one stands decently alone and mostly works for me. Yet be aware this is clearly the middle book in what is (at a minimum) a trilogy and while certain things are resolved, we’re left hanging bigtime at the end, with our heroes only about to begin the rescue mission that the next volume will be built around.

But in any case, here’s my take on the current book:

It’s the early 1700s in a setting that mixes mention of historical Caribbean locations with magical and/or mythic lands of Kenyon’s imagination. This is the golden age of pirates and their sailing ships. Outwardly, the Sea Witch and her suitably motley and volatile crew almost fit the standard bill, with a couple major exceptions.

One: This bunch are all dead people (including an array of mythic and/or magical human-like creatures) who have been brought back from Hell and restored to life.

And two: Their mission is not one of rape and pillage, but saving the world from various Really Bad Guys (various sorts demons and the other evildoers). So while they’re a rough, quarrelsome and deadly bunch, they’re also Good Bad Guys (and Girls).

This entry in the series opens with a confrontation in a pub in North Bimini. In fighting off an attack, they reveal some of their magical powers to the startled mortal patrons. Not good. Worse, a key member of them (the impossibly handsome, brutal and yet brutally and even self-destructively honorable Kalder) is carried off to one of their deadliest enemies.

Negotiating his release, and (at his insistence) that of his possibly untrustworthy brother Muerig from torture-filled captivity, is just the first of many challenges they face. The crew, their allies (including some who’d gladly betray them) and their totally vicious enemies come in such numbers and represent so many sorts of creatures, each with his/her own secrets, personal histories, agendas and abilities (magical and otherwise), that it does get to be a bit of a slog getting through it all.

That’s not to say the book is dull.

Kenyon is an accomplished writer who usually keeps things moving along, despite the psychological complexities of the numerous and often conflicted characters. Foremost of these are Kalder and Cameron, who are desperately in love with each other, though neither feels free to express it. Both look human, but each are something else: Kalder is a male Mermaid (and a Prince, exiled from their underwater city) and the seemingly humble barmaid Cameron has this tendency to sprout angel wings in times of supernatural peril.

Their devoted relationship causes much uproar, what with his tendency to sacrifice himself to protect her, her violently disapproving brother and their stubbornly mutual doubts that each is good enough for the other. Their paranormal romance leads to a couple long, long-delayed and denied, and detailed (perhaps slightly over-detailed) love/sex scenes late in the book. When I say over-detailed, I think the problem is that Kenyon overdoes both characters’ hesitancy. Going back and forth between both minds gets just a tad tiresome to read about, very nearly bogging down the narrative.

As noted above, there are a lot of other characters in play, and I did find it occasionally difficult to keep their various names, nicknames, pseudonyms and secret powers straight.

By the end of the book, the reluctant lovers have resolved their feelings. But others among the crew have been kidnapped and most of the worst of the Baddies are still preparing a fullscale invasion of our mortal world via the fractured Gates of Hell. So Kalder and Cameron have to put a blissful settling down on hold to join in the next book’s rescue mission (and the eventual complete defeat of the demonic threat still lurking just off-stage).