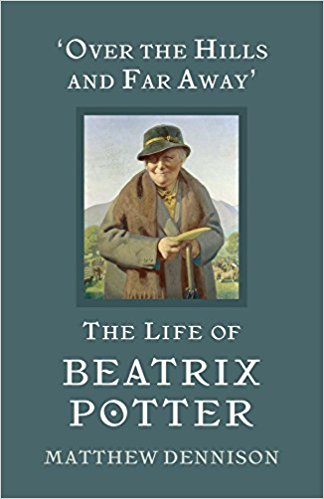 Over the Hills and Far Away: The Life of Beatrix Potter by Matthew Dennison (Biography, 2017).

In this book, Matthew Dennison, a prize-winning author (his Vita Sackville-West bio was named a “Book of the Year” by the London Times), has produced a winning and moving portrait of another revered literary figure. Assisted by telling photographs, quoting extensively letters to/from Potter and the remembrances of others, Dennison reveals how the limits imposed on her by her socially conformist, very Victorian family shaped but could never defeated the woman who became one of the most beloved of all children’s authors (and a very capable illustrator, as well).

Potter’s struggle to discover her true self, while staying as loyal as she could to her uncomprehending parents, is quite fascinating. Her own obsessive nature combined with an active and wide-ranging intellect led Beatrix to embrace art, nature, various sciences, farming and multiple social causes–all with impressive thoroughness, determination and vigor. And of course she brought the same tendencies to writing the string of classic “little books” for young people for which she is most famous. This despite some others’ opinion that writing for living was a not quite appropriate thing for a Lady of a certain social standard to do.

While definitely a woman of her time (if one who often chafed under and sometimes defied her society’s expectations), she created timeless characters like Peter Rabbit, Squirrel Nutkin and that unlikely frog Jeremy Fisher. I was frankly delighted to learn the origins of such characters and many of the memorable scenes or settings they came to inhabit.

I was also fascinated by aspects of her personal life, as well. Dennison deftly reveals Potter as a complex, sometimes contradictory and fully realized, one-of-a-kind individual. And she was one whose life had its share of heartache and loss mixed with love and achievement.

As a final bonus, Dennison includes a heartfelt afterword that shows the sweet influence that Potter’s work still exerts over all the “Little friends of Mr. Macgregor & Peter & Benjamin” even now, a hundred years and more later.