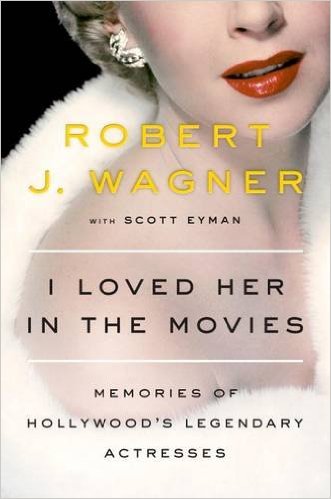 I Loved Her in the Movies by Robert J. Wagner and Scott Eyman. (Show Business Memoir, 2016).

Now (as the Monty Python crew used to say) for something completely different!

Now in his 80s, actor Robert Wagner has been in show business 65 years. Even earlier, living in California, he’d encountered movie people. The first ‘star’ he met was when his school buddy invited him over for the weekend at age 8. His friend’s mom was Norma Shearer (big star in silent films and into the early days of talking pictures). Meanwhile, his co-writer Scott Eyman is a prominent motion picture historian.

Together, they’ve written two previous volumes recounting aspects of Wagner’s memories of the entertainment industry. The subtitle of this one (“Memories of Hollywood’s Legendary Actresses”) pretty accurately describes what it’s all about. Wagner has known, worked with and (occasionally) been in love with a fairly stunning array of film greats.

He doesn’t exactly “tell all”–but he surely does tell a lot about many of them. He admits that actresses (especially big stars) have it rougher than male actors. For one thing, it’s rare that a major female star stays at the top much past age 40 (Meryl Streep notwithstanding). Anyway, Wagner casts a discerning but mostly fond eye on dozens of talented women–recounting their careers, their struggles, successes and missteps, including all too many tragedies.

Anyone fascinated by the movie industry and its female headliners will find this book of interest, and more than a little delightful. There’s also a nice sample of star photos, some with Wagner and many without, sprinkled among the chapters, which are mostly arranged by which decade (from the 1930s on) at which the various women rose to prominence. And late in the book, he devotes separate chapters to the two famed stars he married (Natalie Wood and Jill St. John, in case you didn’t know).

This isn’t an earth-shaking book, no. But it’s not pure fluff, either. It’s nicely written and seems honest.