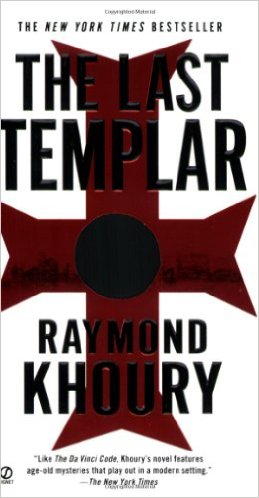 This 526-page adventure epic followed close on the heels of The Da Vinci Code and proved a bestseller in its own right. I wouldn’t quite call it a rip-off of Brown’s work, but there are conspicuous similarities: a seemingly mismatched pair of modern-day adventurers seek the truth behind a vexing mystery, fighting ruthless forces connected to a centuries-old conspiracy with potentially devastating secrets of a religious nature the key to it all.

This nonstop action piece was written by Raymond Khoury, a TV and movie screenwriter, and his predictably strong visual sense is on good display here. Short, vivid chapters abound and the reader is swept along, from New York City to the Vatican and on to environs in and near modern Turkey at often breakneck speed.

Four men on horseback, dressed as warriors of the medieval Order of the Knights of the Temple (popularly known as the Templars) stage a vicious assault on New York’s Metropolitan  Museum, slaughtering people and stealing ancient artifacts and treasures on loan there from the Vatican. This brings together an unlikely duo bent on learning what is behind this outlandish act of brutality. Tess is an archaeologist whose life and career hasn’t turned out to be what she hoped, and not formally religious; Reilly is an FBI agent and a good Catholic. Despite their differences, they feel an immediate connection to each other and circumstances (and some highly questionable snap decisions they both make) join them together in pursuit of the truth.

Unfortunately, the plot is too often propelled by the frankly stupid actions of protagonists. The bewildered and conflicted Tess is perhaps more often responsible in this regard, but Reilly is clearly no overly clear thinker either. I wanted to show them  some slack–even smart people can sometimes do dumb things, especially when faced with the wildly unfamiliar things featured in this book. I was ready to forgive a couple poorly thought out actions. But in the end, the frequent irrationality and worse, the failure of these two to learn from previous mistakes, began to irritate me.

When the reader begins to lose patience with the book’s alleged heroes . . . Not A Good Thing.

And I admit it: top-secret conspiracies lasting hundreds of years are a hard sell for me. That Khoury just about manages to make this one work for me is  a tribute to his skill in managing the willing suspension of disbelief.

And the book’s flashback sections (detailing the Templars’ blood-soaked late 13th and early 14th century downfall through the eyes of one young knight) are truly fascinating. I like Martin of Carmaux as a character–brave and faithful, though often bewildered. I like him more than I like our romantic (but in my view ultimately wrongheaded) lead characters. He’s the most interesting and believable person in the whole book.

And after Reilly and Tess defeat one last lunatic bad-guy (and make what I find a highly dubious decision about what they’ve sought throughout the book )?  A final, tragic and violent flashback in epilogue form has Martin confirm what is true and what is not. But this revelation felt an anticlimax, to me.

Lots of slam-bam action here and some genuine interesting settings. Much religious debating and high-minded pontificating between the violent set pieces. But really, I found the whole less than a sum of its parts. A near-miss.

One thought on “REVIEWED: The Last Templar”