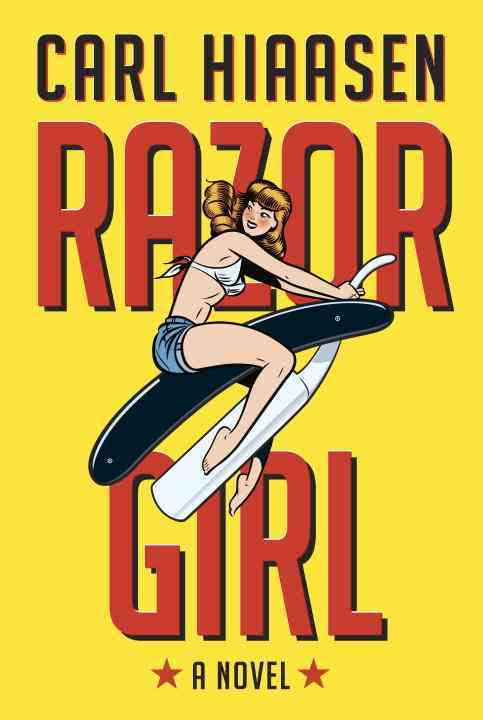 Carl Hiaasen is quite possibly the funniest writer in the US today. His fractured fairy tales paint a vivid and often laugh-out-loud portrait of modern life and crime in America as a whole, with a particular focus on his home ground of southern Florida. His latest, Razor Girl, is no exception.

Dishonored (but still mostly honorable) former Key West detective Andrew Yancy (previously seen in the novel Bad Monkey) has been reduced to checking various eateries for rodent turds and spoiled produce in his new job as a health inspector. Yearning to get his police shield back, he’s also locked in a battle of wits with a rich, self-important (and of course sleazy) personal injury lawyer who has bought the property adjoining his home and plans to put up a massive eyesore of a vacation home that will totally spoil the view from Yancy’s abode. Oh, and Yancy’s lovely girlfriend, Rosa, has become so burned-out on the violence she witnesses daily as an ER doctor, she’s moving to far-off, cold but peaceful Norway.

Things get progressively weirder and more dangerous and confused, not to mention absurdly and satirically humorous, as a famous reality show star, his slimy agents, his most obsessed and dim-witted fan (who’s also a petty criminal), the dirtbag lawyer’s slutty fiancee, a con artist whose latest shady operation involves replacing eroded beach sand, a crew of mafia thugs headed up by one “Big Noogie” Aeola and a number of other often bizarre lowlifes enter the picture. But towering above them all (yes, even eclipsing the giant, invasive Gambian rats bedeviling one of Key West’s most prominent restaurants in overall impact) is that irrepressible force of nature (and title character of the book) Merry (“as in Christmas”) Mansfield.

She’s funny, smart but reckless and a con artist in her own right. Her specialty is hiring herself out to intentionally rear-end selected automobiles. Sometimes this involves insurance fraud, but mostly other crooks use her to get their hands on people who owe them money or have otherwise earned the third party’s ire. Her signature twist on this scam is that when the other driver comes to check on the damage, Merry is seen behind the wheel with her skirt hiked up, her panties down, shaving gel on her crotch and a razor in hand. This definitely leaves the victim understandably befuddled and vulnerable to whatever her employers have in mind.

Then Merry mistakes one silver rental car for another, rear-ending and helping kidnap the wrong guy–setting in motion the wild, wild ride that is this novel.

I should note that, unlike the mostly idiot (often rich) and always self-important bad guys (and girls) in this one, Merry is fun to be around–as Yancy discovers to his considerable surprise (and playfully delicious lust).

There aren’t enough truly fun and funny books around these days. Razor Girl–like other books from Hiaasen I’ve enjoyed in years past–is at once a biting satire of life and mischief in the Sunshine State and a howling good romp.

Highly, highly recommended by this admirer of twisted humor and crime fiction!